In a time when so many venues are closing it was great to go to Peckham Audio a new South East London venue barely 2 months old. Colour me impressed on first impressions. It’s a squeak over 200 capacity with a pit in front of the stage surrounded by balcony viewing areas. The sound for both bands was really clear and, unlike a few venues I’ve been to recently, dry ice was there to enhance the lighting and not to incapacitate asthmatics in the audience.

Italia 90 is the warm up and they don’t disappoint, channelling all the power and commitment of a headlining act. Their music is sharp and compelling with Bobby Portrait (bass) and J Dangerous (drums) adding rhythm and humanity to the icy needle-poke of DJ Mumsnet’s guitar and the sandpaper urgency of lead singer Les Miserable. With political content married to the assault of, what feels like, a sonic exorcism I would firmly put Italia 90 on the list of bands to watch in 2020. Stand out tracks were the anthemic ‘New Factory’ and ‘Keeping My Hands Clean’ with its running guitar screech throughout. 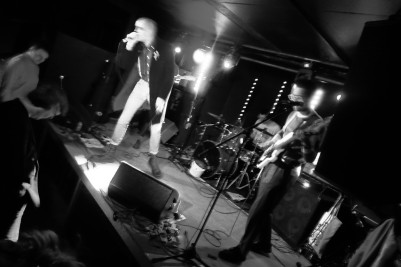 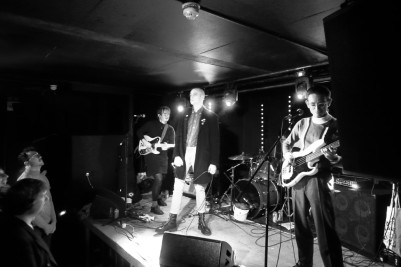 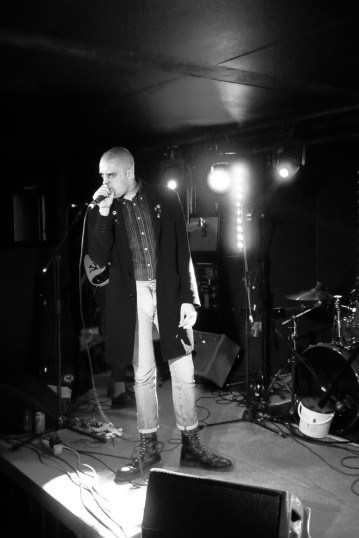 Toronto-based four-piece Deliluh are Kyle Knapp on guitar, sax and vocals, Erik Jude on bass and synth, Julius Pedersen on guitar and synth and Hannah Levin on drums and vocals. They emerged through the dry ice with a slow burning wash of synth, bass, drums and saxophone that morphed into the biting drone of ‘Freeloader Feast’ which maintains a driving rhythm section at its core and allows the guitar and vocals to shift, spike and unsettle, yet also soothe and hypnotize. This is followed by the upbeat canter of ‘Lickspittle: A Nut In The Paste’ which feels like The Fall jamming with The Velvet Underground. In the set were also ‘Hymn’ – a low key amble with a beautiful repeated guitar phrase – and the glorious crescendo of ‘Beneath the Floors’ the title track from their most recent release. There were also stand out tracks from Day Catcher such as the abrasive popiness of ‘No I.D. Denied’ and jagged Gang of Four-like drive of ‘Salford’ from Oath of Intent. 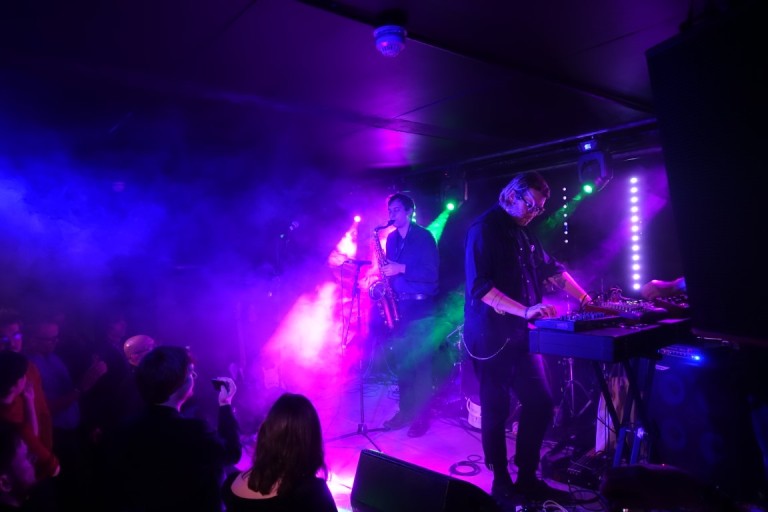 Deliluh mesh the analogue with the digital and push tune and form into a fizzing meditation. They stir sweet and sour into a musical ocean, with swelling tides, unseen currents and eddies that buffet the listener like some cosmic river: Vortex Pop. Jump in and get swept away by Deliluh and if you have a needle-point square on your wall at home that says ‘There’s No Place Like Drone’ then I urge you to check them out live next time they are in the UK.

You can see the angry/happy sensibilities of Italia 90 at their headlining gig at The Lexington in London on January 23, 2020.

One thought on “Live Review: Deliluh + Italia 90 at Peckham Audio”