This was my first time at Giant Steps; an East London venue that has popped up in recent months and, like its near neighbour Studio 9294, or the Bermondsey Social Club, are re-purposing warehouse and industrial space to accommodate music, bars and club nights. Giant Steps is a love song to concrete; access to the venue involves scaling the stairs (or giant steps) to arrive in a spacious bar affording a great view of the canal it sits alongside.

With a frosty can of Five Points Pale in hand we headed into the music venue to find this was a gig in the round. There was no stage (not sure if it was just for this show) so the audience surrounded the bands. However, I could have done without joss sticks dotted around the venue as I am no lover of the all-pervading sweet suffocation they pump into a room.

Support came from Pink Shabab who fed bass guitar and keyboards into a loop pedal to create layers and washes of sound over which he sang in a voice reminiscent of the impassive tone employed by Kraftwerk  (think ‘Radioactivity’ or ‘Trans Europe Express’). The vocals didn’t quite make it above the loops but I think this was the soundman’s issue. The set consisted of gentle dance / funk beats underpinned by PS’s effortless bass lines. I had an overall feeling that this style of music should be called Marshmallow-Electronica as it was pillowy and inviting like a hot tub discotheque. 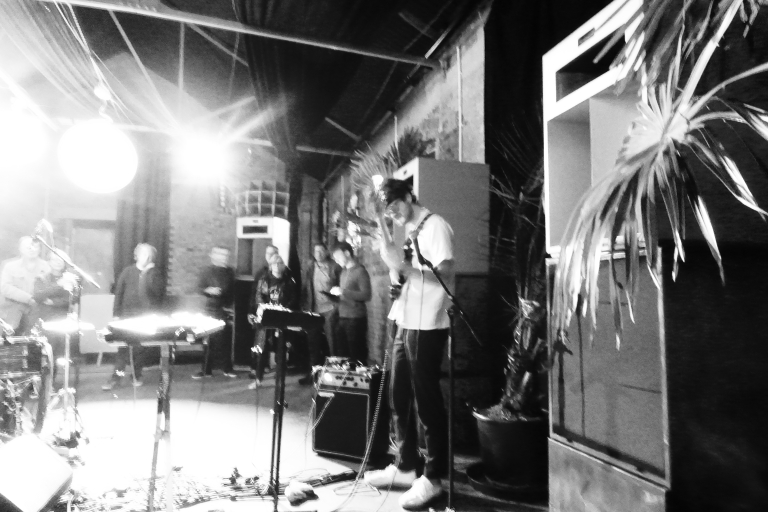 Vanishing Twin performed six out of the ten tracks on their new album The Age of Immunology and also included three from their debut album Choose Your Own Adventure. Tonight singer Cathy Lucas, drummer Valentina Magaletti, bassist Susumu Mukai, Phil M.F.U. on keyboards and Elliott Arndt on flute and percussion were joined by dancer Andrade Jichici who interpreted the songs from a box in the middle of the set up.

The band is very assured and has no trouble bringing a great album out to play for a live audience. They build slowly through ‘You Are Not An Island’ and ‘Cryonic Suspension May Save Your Life’ and it feels like the pace allows everyone in the band to get their Alpha Waves flowing. There are small looks exchanged between band members; tiny nudges or encouragements often accompanied by a smile of satisfaction. Having created a baseline they began to quicken the pulse with ‘Magician’s Success’ and ‘Planète Sauvage’ (apparently a Safari Park in Port-Saint-Père, France); the latter allowing Elliott Arndt to throw a super-cool French voice over on top of the already 60s Gallic Pop vibe. ‘Choose Your Own Adventure’ was the perfect marriage of bubbling pop with a catnip keyboard line and weaving chanson vocals and ‘Floating Heart’ had a chug-chug rhythm that felt like a TGV train speeding through the French countryside. The set closed with two songs that get bodies moving and heads nodding: ‘Backstroke’ and the exquisite ‘The Conservation of Energy’ which received a huge cheer. This gig offered excellent musicianship from great basslines, keyboards that ranged from fragile to squelchy, tickling and compelling percussion and beautiful vocals (with Cathy Lucas wearing a black and white swirled hat that echoed the vinyl release) but, for me, the MVP was drummer Valentina Magaletti who drove everything, smiling her way through some complex phrases. 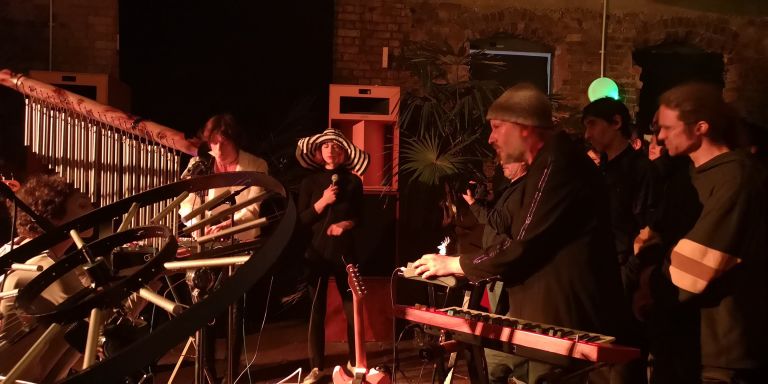 If you have a penchant for the films of Truffaut and Louis Malle; if you like your music with sophistication and the whiff of a Galois; if you reach for a Françoise Hardy or Serge Gainsbourg compilation to help digest your bowl of coffee and croissant on a Sunday morning then check out Vanishing Twin immédiatement. I also want to give due respect to Malcolm Catto who DJ’d between the acts and must have the best weird and wonderful LP collection this side of Johnny Trunk. He spun some cracking tracks including a version of Blue Oyster Cult’s ‘Flaming Telepaths’ by Espers (thank you Shazam).