If you’ve browsed a news website, picked up a paper or caught a bulletin on the TV or radio in the past couple of weeks you can’t have escaped the message of Extinction Rebellion, the grassroots environmental activist movement that brought central London to a standstill to drive home the facts of the climate emergency facing our planet.  Chances are that amongst the footage you’ll have seen the truck parked on Waterloo Bridge to which protestors glued themselves.  The vehicle was used as a stage for musical performances and climate debates and was decorated with a stunning backdrop created by London-based artist Joni Belaruski.

We’ve covered Joni’s work on Joyzine in the past, indeed she even gave us permission to use her piece ‘My Gift to You’ as the cover art for the Joyzine:15 compilation album, and her band The Great Malarkey have been guests on The Joyzine Radio Show.  We caught up with her to talk about the work, the campaign and the role of artists in protest. 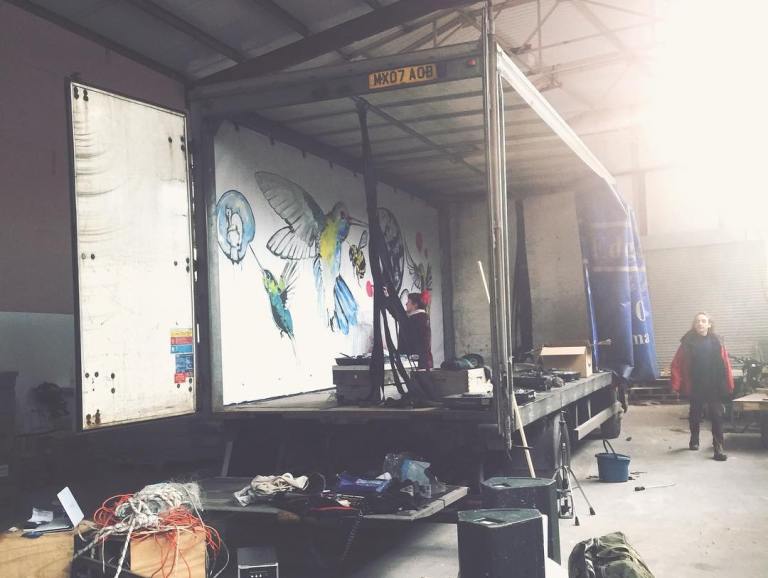 How did you come to get involved with Extinction Rebellion and creating this piece for the Waterloo Bridge protest?

I was approached by Tim, who I’d met previously when playing a gig with my band the Great Malarkey at the Magic Garden in Battersea. He’d recently gotten involved with XR himself and asked if I’d be interested in painting a truck for the protest, which I knew nothing about at this stage. I hadn’t heard much about Extinction Rebellion prior to this but after doing some research on what they were hoping to achieve I felt I absolutely had to help in this small way.

Could you talk us through the work?

Each site had a different theme, with Waterloo Bridge being the ‘alternative garden bridge’ with the theme “Act Now”. I got involved quite late in the day so the idea was very spur of the moment (as in the morning of the painting!) but sometimes I think that’s best as you have no choice but to paint from the heart. The message needed to be positive and in keeping with the theme so I opted for hummingbirds as they symbolise a ray of light in dark times.  You can see within each of the bubbles that they are about to pop with their beaks an issue relating to climate change that needs to be addressed and changed. Basically, the bubble is about to burst and it’s time to act! 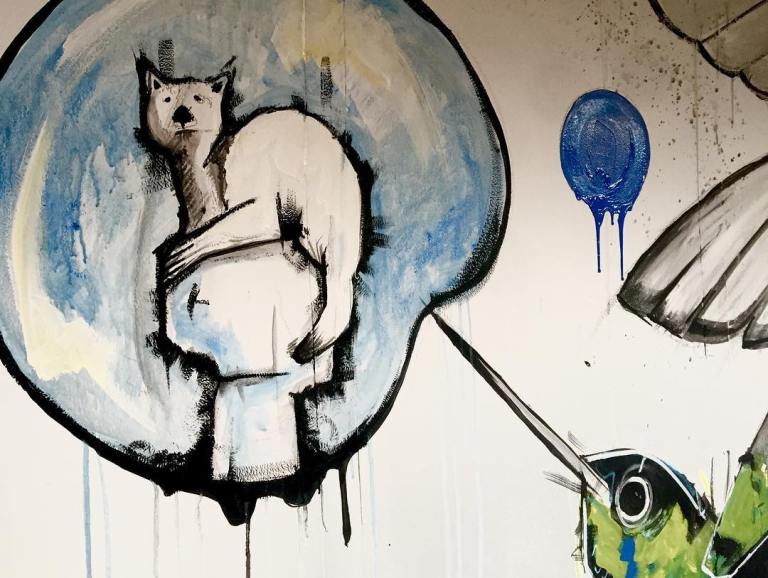 What has been the response to the piece?

Well as the work isn’t about me in this case, I’ve not asked for feedback! But I do hope that people felt the message behind it and enjoyed seeing it on the stage.

What do you see as the role of artists, of any kind, in political protest?  Have modern creatives been sufficiently engaged until now?

I think that art can draw attention to issues, raise awareness and understanding, perhaps even elicit an emotional response strong enough cause action… however, at the end of the day, people create change, not art. I don’t think this needs to diminish the role of art in any way… it’s an important and evolving language that goes beyond politics. My art is not usually politically driven, however sometimes it might inadvertently slide into that arena due to the subject matter used. After having my eyes opened (thanks to the actions of Extinction Rebellion), to the extent of the dire situation that we, the occupants of this planet, have found ourselves in, the fear is real and I feel compelled to create work in response to that. Is that political? I don’t know, maybe.

Can art and music make a difference?  Has it ever done so for you?

Of course! It can be a very influential part of the process.

Have you had the chance to spend much time at the protest sites?  How has the experience been?

I’ve spent time on Waterloo Bridge and Parliament Square. Anyone that’s spent any time at any of the sites will tell you that the atmosphere is electric, exciting and there is a real feeling that change is possible.

Have you been involved with other marches, occupations or similar campaigns in the past?  Has the experience been what you’d expected?

I had slight apprehension that things might get a bit rowdy, even though I know that XR’s philosophy is one of non-violent civil disobedience… however it’s been peaceful, respectful and full of creativity.

How successful do you feel the protest has been so far?  Do you have any further plans to create work for the next stage of the protest?

So far it seems to have been very promising doesn’t it? It’s amazing and inspiring to see how the movement has snowballed this past week. They say all it takes is 3.5% of the population to topple a government so let’s keep it up and they will have to listen.