We arrived at Rough Trade East with sound check in progress and the shop very much open for business and busy with shoppers browsing the racks of CDs and vinyl. It could not be said that the bearded gentleman behind the drum kit on the small raised stage at the back of Rough Trade East was merely ‘tickling” the drums, on the contrary he was hitting them so hard that he’d driven the even the most eager shoppers back from the two racks of CDs closest to the stage. Whist I seriously considered ferreting around in the camera bag for the ear plugs, this little vignette played out…

Sound Engineer: “That’s great. Do you play anything softer on the toms?”

(Cheer from the shop floor…)

I came to Rough Trade fully expecting some seriously loud psych-rock and it looked from the very outset that I wasn’t going to be disappointed..

So I have to ask the question you must have been asked many times before… Where did the name come from?

Why did you stop at only seven Pigs? What happened to the eighth? (The public must know!)

Matt: Google search ‘Number 7’ and you’ll find there’s all kinds of mysticism surrounding it. I think the number 7 chose us, as opposed to the other way round.

Indeed the number 7 is purported to do more than just follow 6, precede 8 and be the sum of 4 and 3. In numerology, it is believed to represent the thinker, the searcher of truth. The 7 never takes anything at face value and is always searching for the truth that is underlying and hidden. A person whose chart is dominated by the number 7 may be somewhat introverted and perhaps even shy. Their intelligence is that of a dreamer, an intellectual explorer of the obscure and their humour is dry, and usually misunderstood. There are 7days in the week, 7 colours in the rainbow, 7 sides on a 50 pence piece, 7 deadly sins. As Matt says, 7 is everywhere. 7 is also the country dialling code for Russia, but perhaps that’s just coincidence. 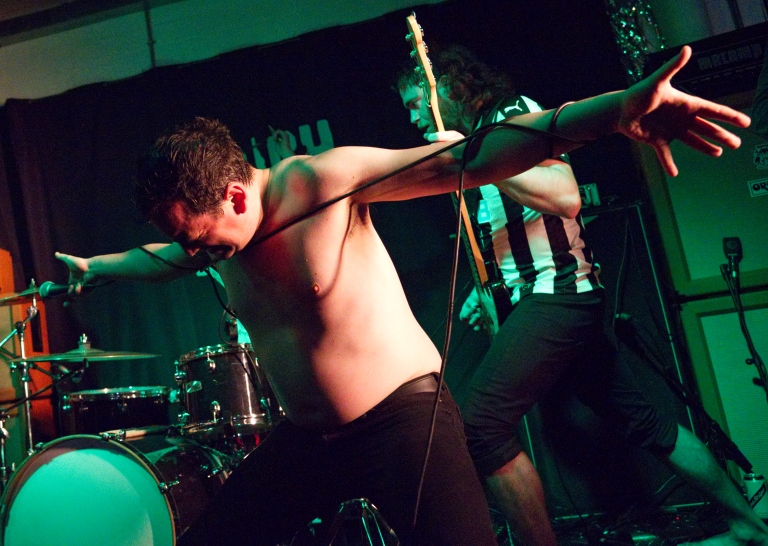 The crowd has gathered, all the members of the band have been herded to ‘side of stage’ in preparation for the show to begin, the lights dim, and the bands intro music begins…

I did not expect this track… It’s Keith Mansfield’s iconic theme to Grandstand.

Keith Mansfield’s iconic Grandstand theme tune was first played on TV in October 1975 on the 1000th edition of the show… What inspired you to step on stage to such an evocative tune?

Based on the way Pigs Pigs Pigs Pigs Pigs Pigs Pigs open their set, it is perhaps fair to say that not all aspects of the number 7’s persona apply to performance. Retiring? Not a word I’d use to describe the ear-splitting thunder that proves that the sound rig at Rough Trade East does indeed have a notch or two above 10 on the volume control. Timorous? Not the monolithic rumbling bass line and thumping drum beat you can feel inside you as an externally enforced heartbeat delivered through bass bin driven chest compressions. Introverted? Definitely not those guitar hooks. Shy? Certainly not Matt Baty’s roaring vocals delivered with total spittle-flecked commitment point blank in to the crowd of a sold out Rough Trade East.

Soon the sweat is flying on stage and the crowd is jumping. The pure commitment, bellowed vocals and combination of almost comical facial expressions with faintly ridiculous posturing, that somehow describes a weirdly compelling and highly theatrical form of bare-chested, rock-yoga, means that Matt Baty’s stage persona commands complete attention.

Matt, you put everything in to your performance! How do you look after your voice to enable you to play back-to-back shows?

It took me a long time to realise that hangovers are REALLY bad for my voice. I think it’s the dehydration, and the amount of loud talking I do when I’m drunk. I stay largely sober at gigs now and stay very hydrated. Water is a life source. It’s a gift. It’s the best drink in town.

“…You know when you’ve had a party? And you’ve left the lid off the hummus over night and it’s gone crusty… And you’ve gotta like scrape the crust away with a damp Dorito to get at the stuff you hope is still worth eating underneath…” (Matt mimes the motion of scrapping out the hummus tub whilst pulling a face of complete disgust) “That’s us tonight that is. Sorry.”

Matt turned back to the microphone stand as an after thought stated: “And it’s not even full fat hummus! It’s that light shit!”

What was it like to play a sold out album launch at the Moth Club last night?

Aside from being very hot and sweaty it was a joyous occasion. Lots of smiling faces radiating and precipitating more joyous energy.

How were you feeling this morning after playing a sold out album launch at Moth Club last night?

My legs hurt a lot but I was full of lovely endorphins. I was hungry too. Maximum physical and mental excursion warrants a big refuel the next morning.

Did this morning’s breakfast really involve chips and dips or did you find more wholesome fare to start your Saturday?

We went to a very affordable public house corporate chain for a just about satisfactory cooked breakfast. My toast was not done properly… warm bread. I feel like the underdone toast was a metaphor for the environment we were in.

Time to own up. Who in the band is the most likely to harbour a secret love for low-fat hummus?

Probably me. Every now and again I go for it in the supermarket instead of the full fat stuff. The choice I make as to whether or not I go full fat or low fat hummus is probably a good indication about how I’m feeling about myself at the time of purchase.

We have a cake rota in the office. Apparently it’s my turn to bring in the goodies this week… I’d like to bake a Cake of Light – can you share the recipe?

Half a cup of hope (half full), 2 cups of joy, maple syrup (as much as makes the mixture go lovely and gooey) and one lightbulb with a very high wattage. Apologies for the US measurements.

Where do you recommend to find those “harder to source” ingredients?

It can sometimes feel like hope and joy can be hard to come by and in short supply so try finding small everyday activities that might make things a little lighter, this will help you start planting joy and hope seeds to harvest your own home grown crop. I suggest things like stroking cute dogs or cats, drinking nice cups of tea with a friend or doing something kind for someone, however small.

Do you use a shop-bought fondant icing or a more “exotic” frosting to complete your Cake of Light?

Shop bought is fine, it’s delicious and saves me time which is essential for doing other things, like eating delicious cakes. Essentially one can use whatever they like, the Cake Of Light is about doing your own thing.

There’s an anarchic energy that the band give off which feeds the exuberant response from the crowd. It’s also a call that’s hard to ignore and seems to be reaching beyond the open doors of the shop. As I look around part way through the set I see smiling faces that weren’t there at the beginning. Pigs Pigs Pigs Pigs Pigs Pigs Pigs performance is drawing in passers by… Passers by that included a stag party in full fancy dress as wrestlers who duly headed straight to the front and got on with the serious business of starting a good natured mosh. The look on the band’s faces was truly a picture to behold. With smiles and laughter all around the last song of the evening took somewhat of a surreal twist when Macho Man Randy Savage climbed up onstage, and was handed Adam Sykes guitar before he jumped down in to the crowd to enjoy the show from a different angle. Perhaps the perfect way to end a Pigs Pigs Pigs Pigs Pigs Pigs Pigs set…

Who is your favourite WWF Wrestler and why?

Other than “Wrestlers” joining you on stage what’s the weirdest thing that happened to you during a performance?

Quite recently at a festival a herd of people dressed as cows appeared during our last song followed by a shepherd who herded them out of the tent once we’d finished.

So there you have it. Pigs Pigs Pigs Pigs Pigs Pigs Pigs take wrestler stage invasions and herds of cows in their stride, revelling in the mayhem whilst dishing out a genuinely engaging stage show. Their sound is gloriously heavy, but never seems to take itself too seriously and I for one really enjoyed this intimate performance.

Gigs, lots of ’em till the end of the year. A full list of shows can be found on our social media things. We also have some shows starting to be announced now for next year too, including big gigs in London, Manchester and Newcastle which we’ve very excited about.

What music is getting played in the tour bus? And who chooses?

He who shouts loudest and for longest chooses. Recent cuts have included Foreigner – ‘Waiting For A Girl Like You’, Robert Palmer – ‘Every Kind Of People’ and TLC – ‘No Scrubs’.